Meet Laura Wise, creator and director of MOTHERSHIP, a Women’s Festival & Retreat that has become home to women seeking a one-of-a-kind camping experience with their female peers. The festival includes an all-female lineup of artists, musicians, culture vultures, educators, philanthropists, and feminists. The three-day, 2-night event, will take place from October 13th – 15th in Coachella Valley, CA, offering everything from live performances by sister pop duo, Faarrow, yoga and holistic healing modalities, and a variety of over 30 workshops.

This year, MOTHERSHIP has partnered with the Tegan and Sara Foundation, a non-profit that helps women and girls of all ages. A portion of festival’s proceeds will be donated to the organization, along with a special appearance by the lovely founders and musicians.

We had the honor of interviewing Laura, where we learned about her life as a therapist, activist, and founder of the most bad ass female-driven festival in the world.

Tell us about your background and the road that led to creating MOTHERSHIP.

By day, I am a therapist that sees a wide variety of individuals. My speciality is women’s empowerment and LGBT affirmative therapy. Throughout the past 9 years in Los Angeles, I found myself throwing caused-based events at least once a year and I decided why not throw an event for a cause I care so much about – gender equality. The small festival I threw year one, was a success and I knew I was on to something! That’s when MOTHERSHIP a 3-day destination festival and retreat was created! We are going on our second year as a destination event and I couldn’t be happier with the direction we are headed!

Who were your female role models growing up? And whom do you admire today?

Growing up, I read a lot. I was really into books and movies about strong female characters. I still love these characters, Romona, Hermoine, Harriet the Spy. As an adult I still love reading about strong women in memoirs like Wild and Tracks. But I also look up to so many women now and feel surrounded by them. My friends and loves ones inspire me by being individuals. Creativity, uniqueness and authenticity. That inspires me.

We’d love to hear about one unforgettable festival moment – whether it took place during the planning stages or at the event.

My dear friend Jess, runs our creativity tent where anyone can go and get body painted, covered in bio-glitter or dressed up in free costumes. She’s great at it because she always  finds beauty in every woman and is an overwhelmingly positive force. She is also a total goofball and decided to come out late night to our silent disco party in a HUGE t-rex costume. The blow up kind. I was so confused….like, who is inside that thing? Festival goers thought it was planned. I couldn’t stop laughing. 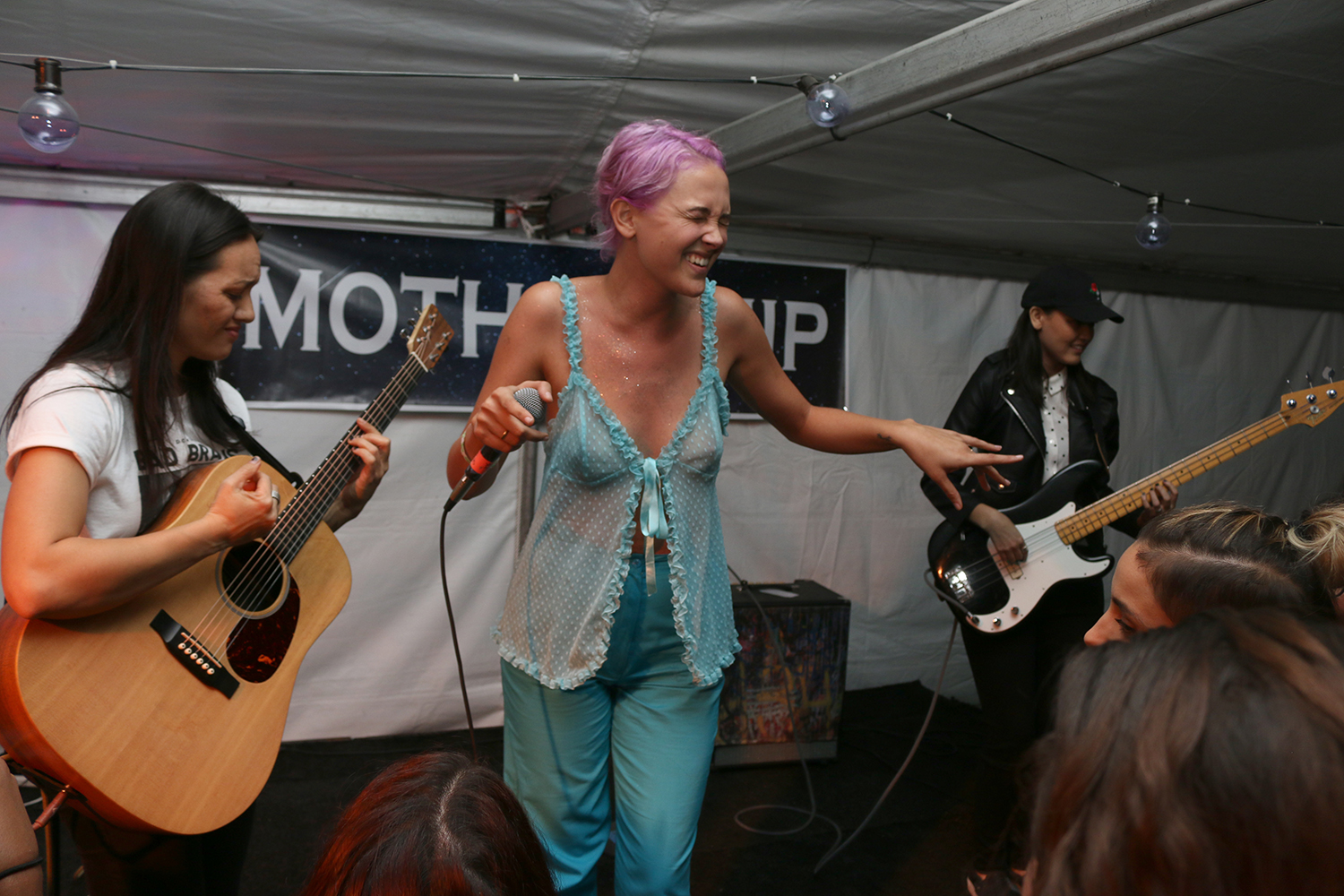 What does it mean to you to be a feminist today?

Being a feminist means being open to dialogue and conversation around feminism. It isn’t holding hard and fast to what YOUR idea of feminism is – because feminism is collaborative. Gender equality might mean one thing to you, and another to someone else. Feminism is the evolution and collection of those ideas – as well as acting upon them.

You have been quoted in saying that ‘We are stronger and louder when we gather together’.  What is your personal advice for women on how to work less competitively and more collaboratively in their respective field?

We live in an individualistic society that is also oppressive towards women. It can be easy to feel threatened by other powerful women when there is so little power being given to us. My advice is don’t wait to be given power, take it. Take as much power as you can and then share it with your sisters. Women are inherently collaborative, I’ve really seen this shine over the past year. We are unstoppable when we work together.

This year marked the first event in over 10 years where a woman headlined the Coachella Valley Music & Arts Festival. Is this the type of statistic that inspires you to book 100% women performers at your festival?

Coachella is reacting to public pressure. They care about money. So put your money where your mouth is. Support female-driven events and festivals that value women – from the beginning. I made this festival because women deserve a platform and the gender inequality in music is glaring. You don’t want to put women on stage? Okay, we’ll make our own.

In your opinion, what is the key takeaway for women attending MOTHERSHIP?

A lot of people say that MOTHERSHIP is indescribable and take away different things from the event. But one thing has been said that I love. There is no division. At MOTHERSHIP our artists hang out with our festival-goers. Our staff isn’t on a power trip – they want to create a loving community. Our press and workshop presenters camp right alongside everyone else. We don’t have a VIP. So it’s created this really collaborative, loving space where everyone feels equal and included. I think that’s pretty special.

Tell us a little bit more about this year’s event. Any must-see workshops or performances?

This year a portion of our proceeds with benefit the Tegan and Sara Foundation, dedicated to the empowerment of LGBT women and girls. Tegan and Sara will also be joining us for a special interactive panel. We also collab with pro-social orgs like THINX  period panties and Twice New will be helping us keep our fest green by sorting and donating items attendees would prefer to leave behind!

Just for fun, name three women you’d love to do the following with:

3. Travel the world with.
Amy Poehler

Women being themselves in their rawest form whatever that looks like. Finding the beauty in flaws and shadows as well as the light.

Learn more about the festival and how to purchase tickets here: www.mothershipfest.com