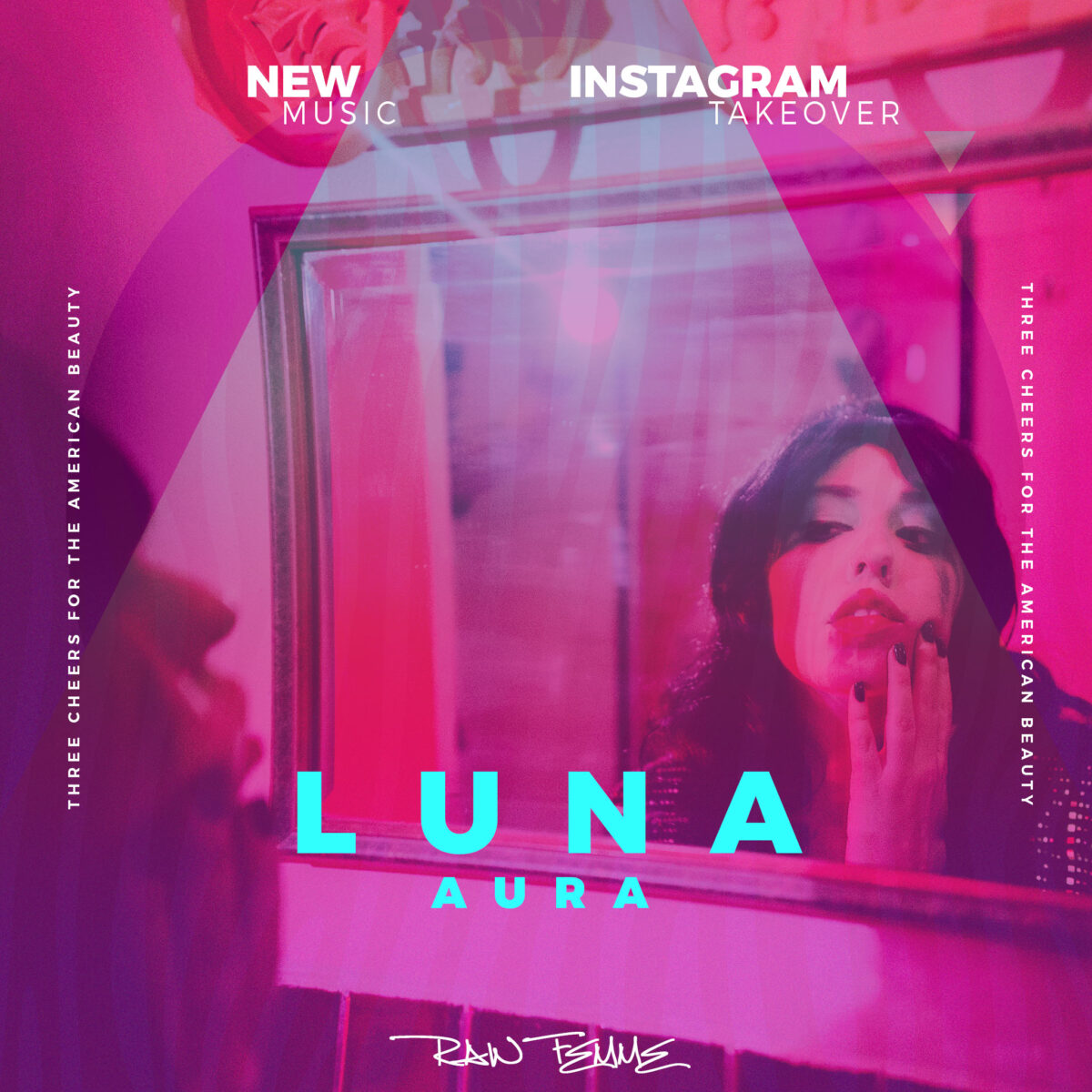 Inspired by the likes of Garbage, NIN, Hole, and Gwen Stefani, LUNA AURA writes unabashed music that gets to the crux of what it means to be a female in the modern world. Her new EP focuses on the female identity and its relationship with American Culture.

We had the honor of catching up LUNA to learn more about her background as a musician and the inspiration behind her upcoming EP THREE CHEERS FOR THE AMERICAN BEAUTY. LUNA is poised to become feminist icon for a whole new generation.

As a self-taught musician, what initially inspired you to pursue music?

Music is almost like an extension of myself. I’ve been singing, writing, playing for as long as I can remember and it’s become my identity in a way. I’ve actually been working hard on reminding myself that my identity is separate from the work that I do, because it can be dangerous attaching yourself to something so fleeting. I think when I initially started pursuing music, I wanted to be famous and rich and cool and all the other BS adolescent reasons for getting into the entertainment industry. It eventually grew into something I was able to consider a career once I realized I was actually good at it. Now I just want to make music because it fulfills me in a way that nothing else can – and being rich/famous/cool, all of that, seems so silly to me now.

Your new single ‘HONEY’ is so incredibly powerful. I especially love the lyrical phrase “My honey’s only sweet if you can take the sting”. Tell us about the songwriting inspiration behind the empowering record.

Thank you so much! Honey is about defiance and control. I think most of us have experience with people underestimating us, or making us feel small in order to make themselves feel bigger. I’ve had plenty of experiences like that throughout my life, and this is a song about chewing those people up and spitting them out. Reminding them who you are.

Thank you for using your voice to empower others, especially because music can give us comfort when not much else can. What does it mean to you to be an activist, and how do you go about fusing that with your music?

I’ve never actually considered myself an activist. I think some things you can go out into the world and work to change, and other things you have to sit silently with and change from within. We can all be activists in our own way, I don’t think there’s a right or wrong way to do it. I choose to act through my music and art and live as an example of the words I speak (a flawed example obviously, because I am only human). I found that speaking up can be just as powerful as anything else. Speaking up for yourself, and for others. I’m lucky to have such an incredible outlet to do so. No matter what you choose to do with your activism, I think it’s important to live as an example of the change you want to see and inspire others to do the same.

Women in Music reports that only 6% of recognized producers are women within the US & Canada. As a musician and producer, do you feel it’s important for women artists to become knowledgeable of music production?

I think it’s important for female artists to do whatever the hell it is they want to do. It’s important that we don’t discourage women from choosing to learn specific skillsets just because it seems like there are only men in those positions, but it’s also important to remind them that they have a choice. I know a lot of female producers and writers, and the problem is not that they don’t exist. The problem is that the men who work in these fields do not know of or choose to work alongside their female peers. It’s a tale as old as time, men in powerful positions uplifting other men, giving other men opportunities, and the cycle of imaginary female producers continues. I think it’s important for women to support women, and even more important for men in this industry to start doing the same.

What were some of your artistic goals while making your up long EP “Three Cheers For The American Beauty?”

I wrote this EP in a time that I was ridding myself of all the cultural conditioning and media programming that was done on me. I think culture and community are constantly interjecting into our lives to tell us what’s right and wrong, and what’s acceptable/not acceptable. We shape ourselves to it. Each song on this EP is attached to a short story of a young girl personifying a different cultural/societal pressure that is put on women in the US; hyper-sexualization of young girls, gender roles, unhealthy beauty standards, etc. Each song on the EP works as the soundtrack to each story, and they come from real-life experiences that have either happened to me or women I know. I think there’s a sense of US VS THEM when discussing the female experience in this country, but I wanted to make something that also covered the battles we fight within ourselves. Sometimes the biggest thing women have to overcome in this country is the conditioning that exists within us. Once we can shed the guilt and shame of not being what the world expects us to be, I think we can take on anything.

The renewed discussion of feminism is playing a major role in today’s music industry. What words of wisdom can you share with aspiring women musicians and entrepreneurs on how to overcome gender discrimination?

Don’t put up with it. Period. I mean this for everyone, not just women. ANYONE who feels like they are being disrespected or treated unfairly because of their gender, race, sexual-orientation, religious beliefs, age, etc… DON’T PUT UP WITH IT. I wish I could go back in time and tell myself that a good opportunity is not and will never be worth mistreatment. This is a crazy industry and a lot of it is who you know and taking advantage of every opportunity that comes your way. I think when you go into it with no boundaries, you find yourself putting up with things that you never thought you would. Know yourself, know your boundaries, and be vocal. It’s better to walk out of a room and leave a good opportunity behind, then to stay and hand over your dignity. Walk out, stick up for yourself, and stick up for others. There will always be another day and another opportunity waiting for you. You can’t change or control what other people do. There will always be someone who mistreats you and it’s your duty to stand up and set the tone, not only for yourself, but for the others that come after you.

I hear hints of Shirley Manson in your vocal style and range. What women recording artists did you admire while growing up and have any influenced your sound?

Shirley is a huge one!! I’m also very obsessed with Gwen Stefani, Trent Reznor, Courtney Love, P!nk, Missy, Alanis, Lauryn.. the list goes on and on. I was fortunate enough to have parents that let me listen to anything and everything so my influences cover a broad spectrum. I definitely think my artistry is a blend of everything I’ve ever experienced throughout my life.

Name one person dead or alive who you’d love to cut a record with and why.

It changes every day, but I have to say Gwen. I’d love to do some fun quirky hollaback-esque track with her. A lot of people end up comparing me to her vocally when I’m in the studio and I light up every time.

What do you want fans to take away from your music?

I just want them to feel confident when they listen to my music. It took me a long time to find myself and feel confident in my own skin, and my god is it amazing once you do. We get so carried away trying to be what we think the world wants us to be, and lose ourselves in the process. I hope my music makes people want to scream, or break something, or tell someone off. We spend a lot of time doing things that make other people happy, and not enough time doing what’s best for us.

I love the word Raw. It’s pure, as is, no mask or distortion. Exactly as it should be. Women are taught from day one that we could never be enough on our own, it’s the greatest lie ever sold. We are powerful, unique, intelligent, strong. Everything we’ve always been since the day we took our first breath. We just need to believe it.