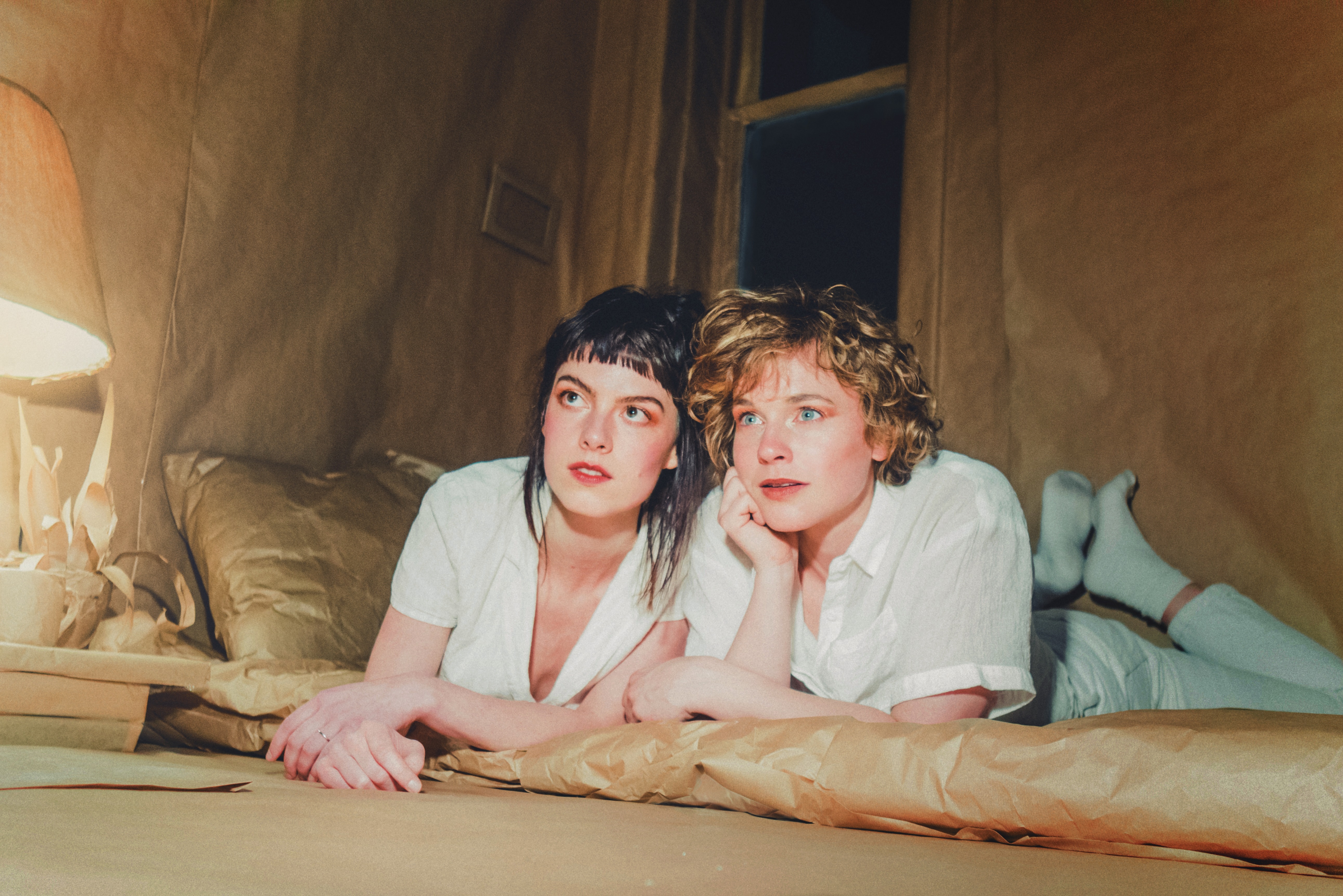 The Leanover (Ali Overing, Lou Seltz, and an international cast of supporting artists) traverses hypnotic melodies and uptempo introspection. Guided by Overing’s lyrics, which have been described  as “political and elegiac and at other times woolgathering,” the band features influences from Overing’s jazz vocal & guitar training, her Caribbean upbringing, Quebec roots, and her folkloric experiences of the US. Lou Seltz’s long standing preoccupation with the subversive music of the 70s—Krautrock, Afrobeat, Tropicália—led to an unconventional interpretation of the bass and an unexpected synchronicity. Pairing spacious vocals with angular instrumentals, live shows invite both introspective swaying and vehement bouncing.

The Leanover formed after Overing returned to upstate New York in 2016 from a cross-country project recording artists and crafting soundscapes in her solar-powered-recording-studio-van. They quickly wrote their debut EP Pawn Trouble, recorded in a single day. After a quick stint working as a nanny for the Prime Minister of Canada, Overing was unable to re-enter the United States. Itching to record another album, the band relocated to Montreal where they immersed themselves in the city’s DIY scene.

Currently, the Leanover is finalizing its long-anticipated new album Portico, recorded over several days in a cabin buried deep in the Laurentian Mountains with producers Megan Miller (And the Kids, Still Kicking) and Julien Beaulieu (Renard Blanc). The album is set for release in July 2019.

Get to know these rad babes below and support!

What initially inspired you pursue music and form The Leanover?

Ali: For me, the music has never been a question– not since I was an angry 12-year-old living with my 3 year old brother in the British Virgin Islands–we were the only two kids who lived on this one tiny island and I had a lot of time to play guitar and write songs. The Leanover, on the other hand was born out of flukes of timing and circumstance. I was back in my college town in the Hudson Valley of New York, visiting my partner, who lived with Lou, during a rare weekend when she wasn’t too busy with her senior thesis for undergrad. I happened to be playing music with our friends when she was free and there happened to be a bass lying around that she started playing. We had done jazz vocal workshop together and I’d seen her singing and playing the Chonguri in Georgian choir, but didn’t know she played bass. As it turns out, she had been deeply immersed in and playing music her whole life. It was really love at first jam (doink). When I got banned from the USA and ended up in Montreal, Lou took a leap of faith and also left everything behind to join me here. I’m so grateful that she did that, because it really catalyzed our headfirst dive into our band.

Your new single ‘Forward and Back’ was released recently, what influenced the sound and songwriting for this track?

Forward and Back was written a year before The Leanover was formed, and tells the story of one specific argument during a two month road trip.  It was an uncomfortable song to write, and even more uncomfortable to share at first because it was one of the only songs with The Leanover that dealt directly with my private life. My partner and I had been watching a storm approach while we were cooking dinner and cleaning out our van– I had wanted to watch and record the incredible show of heat lightning, and he wanted to pack up our stuff before the rain came. Then it started pouring, and we bickered fiendishly as we rushed to get our belongings back in the can. We ended up accidentally breaking our back window with a bike rack that we had secured super haphazardly. The song is a kind of reflection on the things that people say in the heat of the moment. Sometimes, after an argument, we feel so terribly about saying severe things to one another that we apologize for everything that was said. But the bad thing about doing that is that often, what comes out of our mouths in an argument is true, just carelessly worded.

When I brought the song to the band, it was one of the first songs that we worked on together, and probably the first song that Lou wrote a bass part for. When we moved to Montreal, it was one of the songs that we focused on the most as a duo. We started building the drum idea together on Lou’s little drum machine before we brought it to Erik Fines (of Bright Fuschia) who shaped the sound of the drums that we hear on the album.

What were some of your artistic goals while making Portico?

Together we already have a fairly extensive list of songs that we look forward to recording. With Portico we were mostly aiming for continuity in the album and creating a sense of place, a fantasy setting, for the album to soundtrack. The general sonic landscape that we’ve been going for is ethereal grooviness with a hint of pocket rock. That takes a lot of different shapes — songs drift into jazzier, spookier, harder, folkier territory. We wanted the album to ricochet off of emotions like a mind left to wander.

I think that the Indie and DIY scenes have come a really long way in a short amount of time in regards to including and encouraging female musicians in the performance setting. I think that a lot of the barriers that we still face become apparent in more private settings like the rehearsal room. Women still need to be extra loud and super-extra confident in their opinions and musical convictions to be heard and taken seriously when working in bands. I’ve been so frustrated in the past by instances where I don’t have an exact idea of what I’m looking for musically but I have a general sense that I try to communicate. Those ideas often get overlooked because they aren’t fully formed enough. I see men working with the same language and the same amount of uncertainty amongst themselves and have noticed real time and attention going into coaxing out their ideas through experimentation. Women aren’t given that same slack yet unfortunately, and it puts a lot of pressure on us to have very clear intentions before we speak at all.

I hear hints of Fiona Apple in Ali’s vocal style and range. What women recording artists did you admire while growing up and have any influence your sound?

At home growing up, we listened to a lot of soul and motown music. When I was young, singers like Etta James and Aretha Franklin taught me that emotions could be audible. Not to mention that my dad had a tape of Jagged Little Pill, and Tracy Chapman’s self-titled album that we would listen to on repeat in our Daihatsu Feroza while driving over the mountain after school. Bjork showed me the ways that unconventional melodies could grip me. My parents were also huge fans of the Women In Song CD collections, remember those? Oof, so many stars in there.The first time I ever sang in public was for a talent show in the third grade where I sang a Belinda Carlisle song; I think it was “Mad About You?” I don’t really know why or how it was influential, but I still think about it as being super important to me. In middle school I wanted to be Hayley Williams, Amy Lee and Lacey Sturm all rolled into one, but I also was in awe and super inspired by soca and reggae artists like Destra Garcia and Tanya Stevens. All together this makes for a very confusing set of influences.. I still don’t know what’s going on.

What constitutes a good live performance in your opinion?

I think a good live performance happens when the edge of a stage becomes a demarcation between two worlds– when the cliché comes true and the artists literally “lose themselves” to the world of their music, you know what I mean? As long as the musicians are immersed in what their doing and communicating the depth of their songs to the audience, I call that a music well done.

What are your future plans? A tour hopefully!

After our album release show on July 31st, Sarah Armiento of Hot Tramp management, Raw Femme extraordinaire, has us totally hooked us in for the rest of the summer. In the middle of August we’re going on a westerly tour with The Kommenden, a super cool Montreal band that she plays in. On August 31st, we’re super lucky to be playing at Hot Tramp Festival in Montreal, and in September we’ll be playing Pop Montreal fest. We’re really looking forward to getting some more recording done too.

A raw femme trusts their gut and surrounds themselves with the circumstances of their own choices. A raw femme is a healthy probiotic, stimulating the growth of a robust community by will of their inspiration and where they choose to manifest it.