Dating back to the birth of Rock n’ Roll, some would say that this genre of music was inappropriate terrain for feminist musicians. Enter Shawna Potter, War on Women’s frontwoman, who encompassed the perfect amount of female ingenuity that was needed to propel the feminist movement forward. Inspired by prolific voices such as Kathleen Hanna, credited as inciting the the Riot Grrrl movement which juxtaposed the intensity of hardcore with a feminist perspective, “Baltimore’s War On Women were born screaming—at the world, at the status quo, in the face of oppression. The band’s forthcoming album Capture The Flag calcifies that rage, and no one in its wake is safe. Much more than a collection of songs or sonic experiment, Capture The Flag is a call to action that cannot be ignored.”

We had the opportunity to interview Shawna and learn more about her colossal influence on the shift of women’s role in the world of hardcore-punk music, her past as a women’s rights activist, and her upcoming acoustic performance on April 7, 2018 at the incredible fan-driven Emerge Impact + Music Festival in Las Vegas, Nevada.

What initially inspired you to become an artist, and more importantly a group?

When I was a kid, I saw a woman on MTV playing guitar and that’s when I knew I could do it, too. I associated guitar with rock music (I know better now). I liked the way aggression was expressed, and if you were gonna play rock you were gonna play in a rock band. It was always a collaborative process, in my mind.

Your music is an empowering form of feminist activism. How does music affect you and the world around you?

That is a huge question! I’ll answer it the same way I answered a similar question in a job interview to be a high school dance and wedding DJ: music has been shown  to affect our heart rate, so our bodies are literally responding to it in automatic ways that we are not conscious of. This is why any song can hit any person so intensely, or hit them differently than the person next to them. The right song can put you in the right mood for anything, whether it’s sex, cleaning the house, a good cry, or protesting fascism…. I got the DJ job, by the way.

Define Feminism in your own words, and what advice do you have for those who fail to understand what the term truly implies and what changes it seeks to enact.

I prefer to lift the voice of Nigerian writer Chimamanda Ngozi Adichie, who said “Feminist: the person who believes in the social, political, and economic equality of the sexes.” Often when I’m speaking to people who belong to a group that is normally represented by their government and reflected in media (straight white men), I use the phrase “We are not overreacting – we have been under-reacting up until now” when discussing how the rest of us keep “asking for more” when fighting for our equal rights. We just want the same base level opportunities and respect and protection under the law that everyone else has had by default this whole time.

Capture The Flag is stated to “calcify rage, and no one in its wake is safe”. We love this. Please touch on your songwriting inspiration for the forthcoming album, and what exactly do you hope to shed light on through your call-to-action lyricism?

I want us to keep resisting, I want us to regularly practice self-care and get right back to resisting. I never want us to think that what is happening right now in politics is normal.

While not every song on the record is about huge political issues, I did write most of the lyrics while the cluster-fuck of the Trump regime was hanging over us. So, it was in the background of everything I was writing. The exhaustion, the shock, the anger. 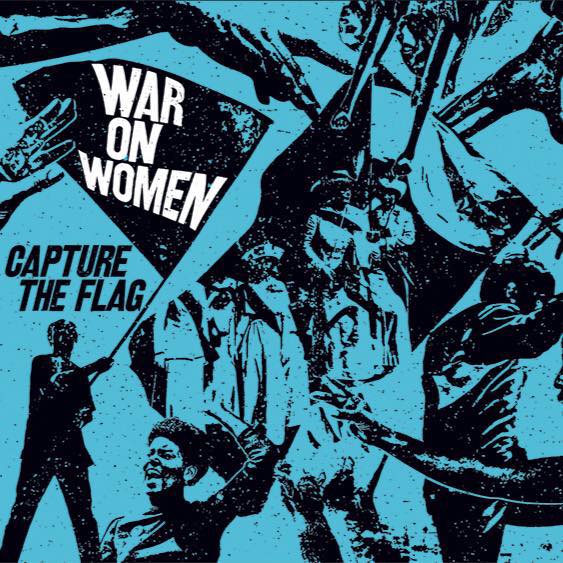 Which female activists did you admire while growing up?

Growing up, I wasn’t interested in activism or conscious of it, really. But I loved outspoken women. I must have just thought of that as normal, not realizing that what Bikini Kill did at the time was activism. Or Janet Jackson’s Rhythm Nation, both very influential on me. But after being in this band for a bit, I think we have started to accept that we can be in a band and also be activists, that we can use our music and shows as an opportunity for activism.

What advice would you give girls who are just starting out in their local punk scenes, or who want to start a band but don’t feel like they can?

I’d say – do you think any boys your age feel like they “can’t” start a punk band?! No, of course not, so why should you? Get some cheap gear, get a guitar set up, learn some chords from Youtube or a nice friend, and start getting together with people who play other instruments.

I think Prince would have really pushed my buttons and pushed me to my limits.

EMERGE is fast-approaching and we couldn’t be more excited to see your showcase! What do you want fans to take away from your live performance?

This will be an acoustic performance, which is a rare treat for us. The songs will be stripped down, modified to make more sense on one guitar, and you’ll hear the lyrics, so I hope it’s easier to connect with the subject matter! I want anyone listening to hear the anger – and the humor.

Just for fun: What guilty pleasure songs would we have found on your MP3 player in high school?

I feel no guilt for liking what I liked in high school. Or, I try not to. Good rock, good hip hop, good pop, whatever. The worst stuff in my collection is probably my friends bands at the time!

Femme, in a natural state, before breaking down from the heat of a white supremacist hetero-patriarchal society.