Teenage artist Panteha Abareshi is making the invisible, visible. As a toddler Abareshi was diagnosed with sickle cell thalassemia; she also lives with debilitating anxiety and depression. It was during one of her long hospitalizations that she discovered a love of drawing. Today, this self-taught illustrator uses her fascination with horror and gore as a lens to make the internal experience of living with invisible illnesses visible to others.

In addition to pattern design inspired by her own blood condition, Abareshi’s work focuses on portraiture. She primarily draws Women of Color, who are underrepresented in our cultural depictions of mental illness. Her portraits are gory and frightening, yet colorful and vibrant at the same time. She describes the gore element in her illustrations as “…tangible, obviously painful things that are impossible to miss…physical embodiments of what depression feels like”.

Earlier this year, Abareshi was chosen to illustrate a 15-part article series for Bitch Media called In Sickness. 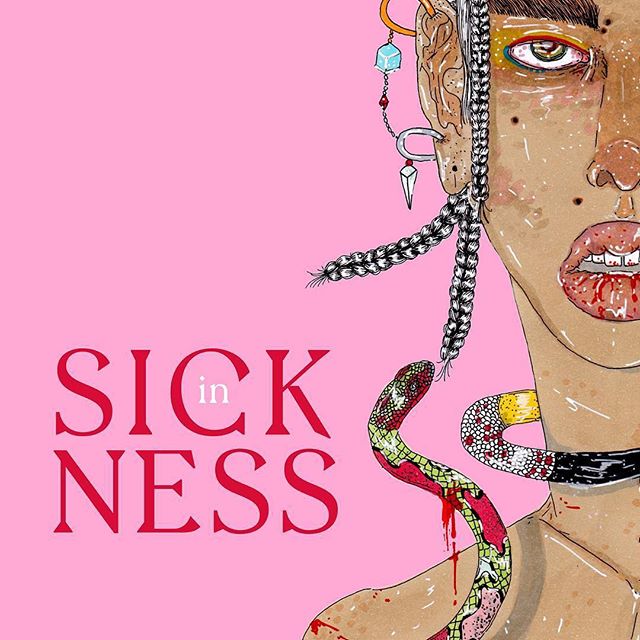 This series delved deep into issues of chronic illness, disability, chronic pain, and mental illness as feminist issues. For each article, Abareshi created a different portrait or pattern, providing an arresting visual component to a series that frequently dealt with the struggle of invisibility.

Abareshi weaves elements such as snakes, tattoos, and blood through her portraits for the series. For for a piece about Indigenous people and chronic illness  she depicts a figure covered with snakes. The figure’s gender is unclear, and their expression is listless, as if they haven’t noticed the creatures coiling around their limbs. For another article which challenges the body positivity movement to make room for illness and disability, her portrait is of a figure framed from upper chest to upper lip. Our window on the subject is just big enough for us to see that they have tattoos that read “don’t kiss it better bite it off”, and that they have bitten off one of their own fingers.

Her pattern designs for In Sickness are more abstract, but still hint at the subject matter at hand. For an article about endometriosis and hysteria, pairs of interlocking black bands are interspersed with sharp-looking broken shards. The bands appear again for a piece on the public’s awareness of chronic illness . This time, the bands are red and accompanied by leaves. The leaves are riddled with holes and look wilted and sickly. And for an article about gender and dismissal in the medical field , single bands form a pattern with amoeba-like splotches filled with flames. 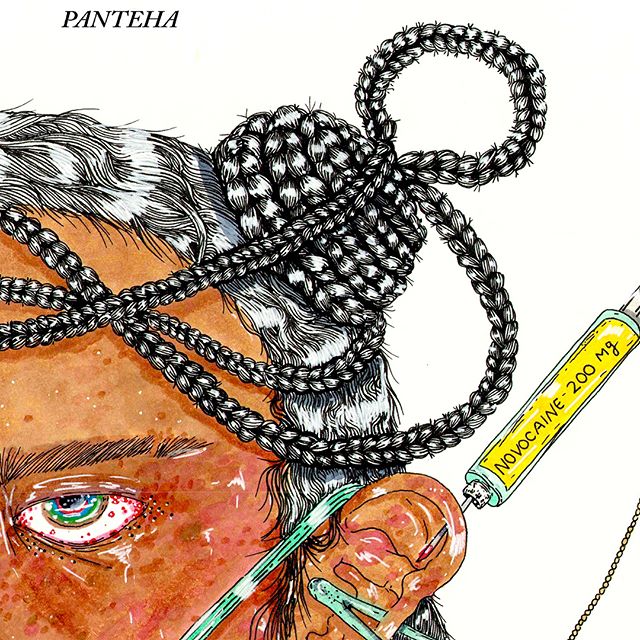 The girls I draw don’t need anyone, they don’t want anyone. They are strong and standing alone.They’re not phased by broken bones, or blood gushing from their wounds. The things that I draw, like knives and roses through the neck, bloody noses…these are tangible, obviously painful things that are impossible to miss. These are, to me, physical embodiments of what depression feels like.

Writing is not a visual medium. But by pairing these unflinching examinations of illness, oppression, and invisibility with Abareshi’s arresting artwork, we the audience are given a visceral connection to the material. Panteha Abareshi’s work is disturbing, and that’s what makes it powerful. It takes something easy to ignore and demands that the viewer confront it.