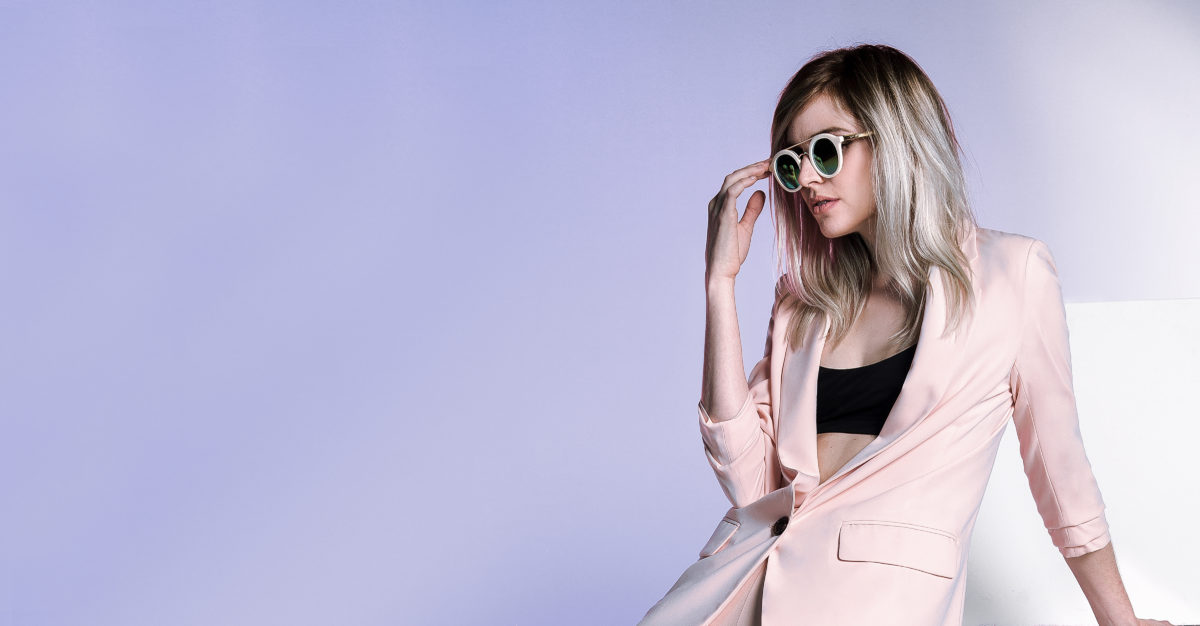 Meet Shy Beast’s frontwoman, Mariclaire (MC) Glaeser – leader of the band, songwriter, singer, and keyboardist. Both shy and beastly, she is the creative force of the group. Her vocal range is huge, and she uses it to captivate audiences, and claim her place as the alpha in her pride of musical men.

Directed by Brittany Reeber, “Back With Me” is the first music video to debut since Shy Beast’s inception.

“The video “Back with Me” uses movement, replacement, color, and light, to explore a woman’s transition from the feeling of being trapped in an apologetic spiral, to a deepening trust and confidence in herself.”

Get to know MC and learn about her journey in becoming one of music’s rising female leads.

Congratulations on the release of your debut EP! We’ve listened to it non-stop on our end. Where did you gather songwriting inspiration for this album?

Non-stop!!? Take a break! We don’t need you to get sick of us. We’ve got more new songs that we have already begun recording so be sure to pace yourselves!

I wrote Back with Me which is about learning how to like yourself and being ok after the end of a significant relationship. It’s also about trusting your instincts and learning how to be unapologetic. I also have fun dancing to it.

Andrew wrote Forever which was his ode to his future love, which has since materialized. For Now was written by David which was an exercise in creative writing combined with his and my ever-changing world view.

Watching my older brother form his first band when he was in middle school had a big impact on me. His passion for writing music made me want to jump on the “band” wagon for sure.

Tell us about when Shy Beast was born. Were you already friends with your babelicious bandmates?

Shy Beast was born after the incubation of my MCG zygotes. These gorgeous men came into my life in various ways. David and Jay grew up down the street from me, and I met Andrew and Drew a few years ago before entrusting them with the keys to my musical kingdom

As a frontwoman, are there any challenges that you fight to overcome, perhaps feeling isolated at times? If so, how do you overcome them when feminism plays such a major role in today’s world.

When I first started performing it was much more daunting. I was pretty hesitant to ask for things like more vocals in my monitor from sound guys, and was at times met with sarcasm or was ignored. I also had to learn to stick up for myself in conversations with drunk/sloppy dudes after playing a show. Fortunately, my bandmates are extremely supportive. I’ve definitely cried in band practice at least twice and was met with hugs and encouragement. I also think that being a woman doesn’t make me more sensitive than my bandmates. We all have to communicate constantly in such a close creative business. When it comes to overcoming feelings of isolation, I want so much to exude confidence as well as transparency on stage. It’s a wonderful feeling when someone comes up to me and tells me that my song helped them through a low point in their week or month. I’ve done my job if that happens.

What was your experience like working Brittany Reeber? Did you work closely together on the music video concept for ‘Back With Me’?

Brittany is an amazing woman. She had done a completely outrageous music video called “Como” for a band call Holiday Mountain and we were really impressed. We knew that if she had that sort of vision that she could make my particular vision for Back with Me come to life. It was convenient that David was friends with Brittany and could help convince her to take part. I had a vague idea of using color and lights and dance using wide open spaces, but then limiting that space with a small elevated square in the middle of everything. The rest was Brittany.

What do you want your fans to take away from your music?

If they have a song stuck in their head for a while, that’s a huge plus. If they find themselves dancing alone in the dark, even better. If they connect emotionally with our music, KABLAMO!!!

Burt Bacharach because no one ever says Burt Bacharach…just kidding…but really my mom and I are huge fans. His music just does it for me. I saw him perform live in Austin a few years ago and it was epic to say the least. “Do you know the way to San Jose?” He’s one groovy cat as well as a genius composer.

What does the future hold for Shy Beast?

The great unknown…For serious though, we have new music on the way. I’ve also got a new pink suit with neon EL wire ready to be sewn onto it.

“Girl Power! Equalization between the sexes..mmmm”~ quote from the movie Spice World.