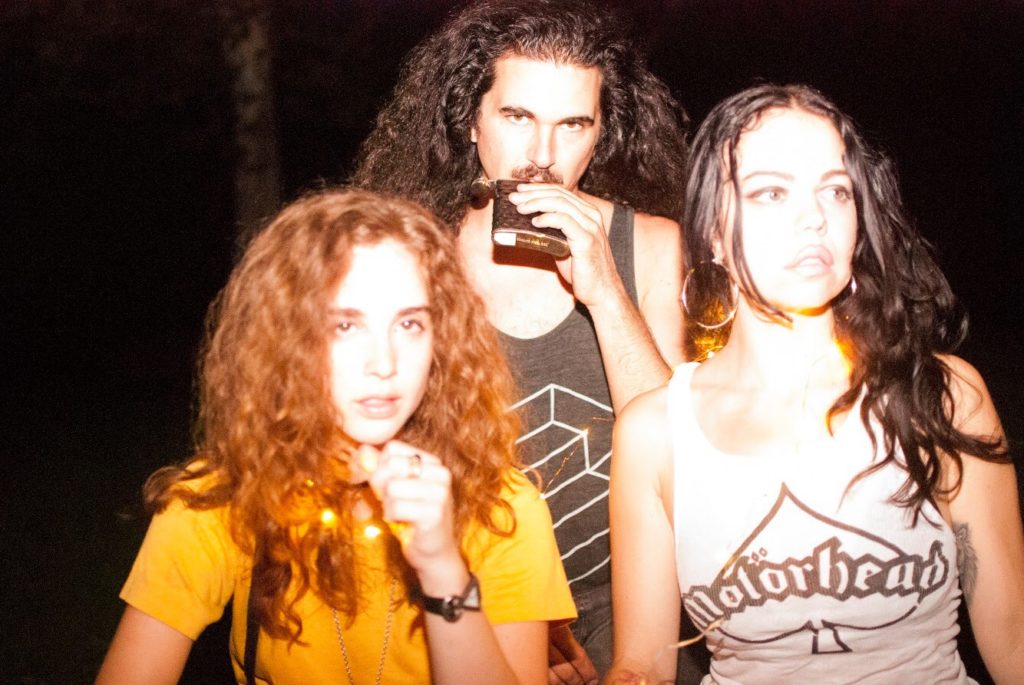 Egg Drop Soup is a “garbage-punk” trio based out of Los Angeles, CA. They are Olivia Saperstein on guitar/backing vocals, Samantha (Sammy) Westervelt on bass/lead vocals, and Greg Settino on drums. With their band name being not only a popular Chinese soup but also a sly reference to menstruation, it’s no wonder LA music blog Grimy Goods said that Egg Drop Soup has “Feminism in their DNA”.

Our girl, Amanda Riley, caught up recently before a gig at The Satellite in LA. This week they’ll be heading out for SXSW on their first tour outside of the West Coast.

What do you want most out of this tour?

Sammy: Exposing the Soup to this other part of the country we haven’t been to yet. Just tossing that shit on them.
Olivia: We want to feed the poor.
Sammy: Drizzle it on them.
Olivia: They’re missing their soup.
Greg: This is some Robin Hood shit. (laughs) I still subscribe very much to the idea that you just have to take it to the people. You didn’t know that you needed us until we showed up.
Sammy: So much of music is the moment that it’s happening, right? The recording that you listen to, that’s just a moment when something happened. So each live show has its own moment and you’re hearing just a different part of yourself with people. I like to think that you can experience a sort of catharsis by watching someone perform their work. Whether its music or its live theater or anything like that. You experience something that maybe is hard for you to access because you live in this world that’s all about parameters and just fucking being tied down and boxed in to some sort of paradigm, right? So any type of art can take you out of that and let you just sort of be for a second. So I hope to give that to people.
Greg: When you’re playing the same songs every night, it’s always going to be a little different. It’s the same notes the same parts but it’s always going to be its own thing.
Olivia: I’m just excited to see how people in different parts of the country react. And if they do get that feeling.

Olivia: I know it’s not like that in every scene…there’s people booking female acts all the time.
Sammy: Everyone’s out here kinda pushing for the revolution, you know? But at the same time, I feel like we’re in a bubble in LA. And we’re really, really far removed from the parts of the country that need the message that we’re all trying to spread the most. So I think that’s why we’re so fucking privileged to be able to go on this tour.

On some of the assumptions and expectations placed on “girl bands”:

Olivia: Sammy and I were talking about how some people will assume because you’re a woman in a band that you’re going to like every other band that has a woman in it.
Sammy: Or you have to like the band because there’s a woman in it. But you still have to be objective. That’s not fair, you know?
Olivia: For me, I feel a solidarity. There’s that silent nod. But that doesn’t mean that I like everything. That’s crazy.
Sammy: Does every dude have to like every other dude’s band?
Olivia: There’s just more room. It’s the same with the film industry. There’s just more room for nuance.
Sammy: It’s such a bummer that there’s still such a binary in our world. We still have to consider how are we treated and it’s just like ugh can we not all just be playing music? Who cares if you have a dick or a fucking pussy! Just get over it. You know? I’m for human rights. I think feminism should be humanism. It’s uplifting everyone. We can’t put someone else down because we’ve been put down. That’s exactly what they want us to do. They want us to be as bad as they’ve been trying to make us out to be.
Greg: They’re breeding the adversarial relationship that men have had with women in that way.
Olivia: Listen, I saw this great meme today that said something like ‘As a woman I’ve basically gotten mocked and judged for everything I’ve done my entire life so I’m just going to do whatever the fuck I want’
Sammy: And it has that skeleton riding through space in a chair?
Olivia: (laughs) Yeah! And that’s kinda how I feel. I used to work at it, to be honest, and I used to feel like there was no room for me to fuck up. Like so much pressure to be so good because I was representing all women or something which is such fucking bullshit. Like sorry no I’m just gonna be me and enjoy my life and that’s fucking enough and that’s fucking revolutionary in itself.
Sammy: And that’s fucking Egg Drop Soup!

Catch Egg Drop Soup with KEEN and Laabradoor on March 7 at Double Down Saloon.